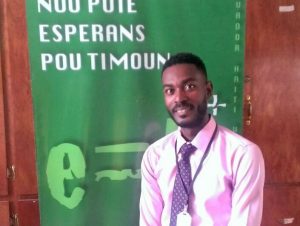 Haiti is the poorest country in the Americas and one of the poorest in the world. This is the story of one of the citizens, Jimmy Brutus.  He was given hope in a desperate and difficult situation. When Jimmy was six, his mother died and never having met his father, was sent to live with his aunt, uncle and three cousins with his brother.  Unfortunately, grief followed him.  Nine years later “darkness started and the bridge of hope collapsed” he said after his uncle died.  His aunt, with 5 children in the home, didn’t have money to buy food or send the children to school.  Jimmy was lost in grief, without hope… out of school from September until the end of April.  (Picture: Jimmy and his Mom)

One day, when playing soccer on a playground, a priest asked him why he wasn’t in school.  Jimmy told the priest that his aunt didn’t have money to buy a uniform or books for him to go to school.  The priest told him to go to St. Saviour School the next day to talk with him.  When Jimmy went to see the priest, he was told that there were only two months remaining in the school year, but if he studied hard and passed the year end exams, he could receive a scholarship for the next year.  It seemed impossible to learn the entire year’s worth of learning, but Jimmy was given hope for his situation.  He passed that year and he was given a scholarship the following year, Jimmy continued to study hard and was given much hope until he finished University studies at BTI, the Business Technical Institute in Les Cayes. Jimmy is now the Onsite Coordinator in Les Cayes, Haiti for Education Equals Hope.  His philosophy: “Trust in God, and he will find a way.  Tomorrow the sun will shine.” (Picture below: Jimmy Brutus today. )